What The Hell Did I Just Watch? 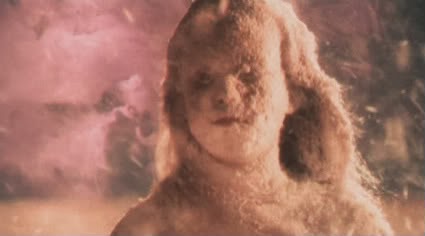 Michael J. Paradise’s dueling space alien, evil child magic mushroom day tripping movie THE VISITOR is amazing. Seriously. Its a movie unlike anything I’ve ever seen. But it is a shambles, a tragic mess overstuffed with lumbering performances, hokey dialogue, and cheapo special effects.

Before talking about anything else, this cast needs to be named, the shame includes: Glenn Ford, Shelley Winters, directors John Huston and Sam Peckinpah, Lance Henriksen, Mel Ferrer, and Franco Nero.  Powerhouse cast fueled by cocaine and bad decisions. 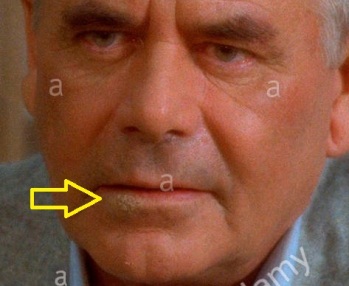 First and foremost, let us address Glenn Ford’s herpes sore or dog bite or whatever. It is poorly covered up with makeup, but is a distracting reminder of the frailty of the human condition in the late 1970s America. Even our most iconic heroes were conscripted into movies where children call you a pervert and filming can’t be delayed until your sexual virus clears up. But, really, disco.

Secondly, let us now address, John Huston. His entire presence in the movie consists of him walking up and down stairs and standing on roof tops with his arms spread-wide. He plays a godlike alien who returns to earth to stop the offspring of his arch enemy, a space warlord known as Saateen. Get it? Anyway, Huston manages to save NO one but does kidnap the little girl to take her back to the romper room run by Franco Nero’s Space Jesus.

If that makes sense to you, then you will enjoy watching Shelley Winters stalk around the edges of the kitchen slapping little girls. You will marvel at Lance Henriksen’s attempts to marry Joanne Nail, a single mother who was married to the muttering, strung out abortionist Sam Peckinpah. There are birds of prey and a little girl who can toss bullies through windows at the skating rink. Also, there is a fifteen minute, real time basketball game that opens the movie.